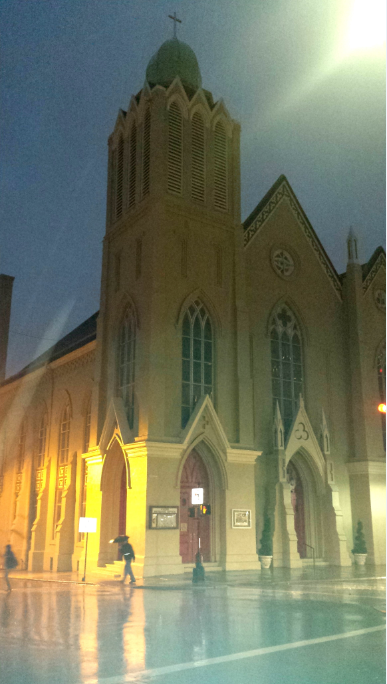 This tour explores the memories that New Brunswick residents associate with permanence of place, within a landscape that is otherwise frequently changing. One of the purposes of this tour is to explore and try to understand which of these sites have meanings that are specific to members of the Rutgers community or to members of the New Brunswick community, and which sites possess significance to both. In terms of memory, to whom do the sites of the Corner Tavern, the George Street Playhouse, the Stress Factory, or the shops and restaurants on George Street belong? Steven Hilger’s interview, for instance, brings to light the idea of New Brunswick as a playground for Rutgers students, highlighting the divide between students and longtime residents.

This is not to suggest that the landscape is irreparably divided. Russell Marchetta focuses on community in downtown New Brunswick, and addresses the Johnson & Johnson headquarters and venues for entertainment and learning such as the George Street Playhouse. These two sites are frequented by both Rutgers and New Brunswick residents and present an opportunity to unite these two communities around their benefits and monumental significance. Spook Handy also brings a musical aspect of community to the tour,  through his discussion of the Corner Tavern, a site of immense importance in terms of music and entertainment for both Rutgers students and New Brunswick citizens.

Exploring this tour, we hope that visitors come to appreciate the benefits that come with a unified community that includes and addresses the needs of everyone, and which also celebrates New Brunswick’s rich history as well as its continued importance in the present and in the years to come.

We would also like to acknowledge and thank Martisha Dwyer, Spook Handy, Sean Hewitt, Stephen Hilger, Russell Marchetta, The Civic League of Greater New Brunswick and Dr. C. Roy Epps, and the New Brunswick Free Public Library for all of their help and contributions to this project.

Tracing the Revitalization of New Brunswick Through Gentrification

Tracing the Revitalization of New Brunswick Through Gentrification

Gentrification is the expansion of wealthier populations into poorer urban areas, and results in increases to property values, property taxes, and the cost of living. Although the term is often used negatively as it implies the displacement of poorer communities, oftentimes crime rates decrease, drug and alcohol abuse decreases, more resources become available and education levels increase during and following gentrification. Each location we chose to examine has a long history, and has been part of the changes to the physical, cultural, and economic landscape of the entire city of New Brunswick. By looking at these histories and changes, we hope to prove that while gentrification may be helping to make New Brunswick a safer place to live, there are still communities that need more attention so that they too can thrive in our town.

Before the 1960s, career opportunities provided by Rutgers and Johnson & Johnson provided New Brunswick residents with stable incomes while allowing them to remain in the city. A changing economic situation in the 1960s led to a loss of factory jobs and catalyzed the city’s ”white flight”--the departure of white residents--drastically changing the city’s economic and racial composition in the following decades. In an attempt to eliminate the effects of concentrated poverty on the community, New Brunswick has begun catering to the professional class, expanding the theater district and building new housing developments. These economic and cultural opportunities for professionals have displaced poorer residents, endangered independently-owned business, closed school systems, and resulted in the demolition of the Memorial Homes low-income housing district. A central question to this tour: what comes next? Will new memories of change and displacement continue to be generated in the future, or are there alternative courses to explore?

According to the 2010 Census, New Brunswick has a population of 55,181 residents. The median household income is $44,500 and 25% of the population lives below the poverty line. These numbers, however, do not tell us much about the vibrant people, diverse heritages, and wide range of backgrounds that define the residents of the city.  Communities vary in meaning depending on their location and how they are organized politically, socially, and economically. In addition, within a single location, community can mean multiple things to residents based on their differing perspectives. Although community often refers to shared beliefs, values, and goals that bring residents together in fellowship, the reality is more complicated. Communities contain a variety of people from various backgrounds, which can create friction and can lead to the exclusion of individuals.  When diversity allows forms of political, social and economic homology, a more progressive and riveting community emerges.  In common, however, a community consists of a host of people who make up one populace.

This project seeks to trace the different communities that exist within the city of New Brunswick.  Some locations were spots where people generally came together to socialize, hangout and eat with friends.  Now, there are also spots where the city of New Brunswick bands together to help the other members of the community when they need it most, around matters of collective concern, such as providing healthier food options.  Other locations represent spots where the academic community of Rutgers met with non-university affiliated members of the New Brunswick community to discuss matters of concern to both constituencies. This project also addresses what happens when an individual is excluded from the larger community due to race. Exclusion can be a traumatic phenomena related to communities, and can leave members confined to the margins of a society.  For some individuals, exclusion trends within the city inspires a desire to speak out and strive for equality.  For other individuals, workplace and other forms of discrimination can create a somewhat sour opinion of the community as a whole.

We welcome you to trace the city of New Brunswick through the framework of how processes of inclusion and exclusion shape a community.

Each interviewee featured in "Serving the Hub City" has impacted New Brunswick by actively engaging the city's diverse community. Some have given back through political action. Others have established outreach programs for children to teens and an organization to access healthcare and health improvement practices. One helped provide entertainment for all of New Brunswick to enjoy. Many have their roots here along the banks of the Raritan and have made it their permanent home. Most importantly, all of them cared for and wished to improve “Hub City”.

The stories that aren’t specified here are just as important as those of the featured interviewees. These are all extremely visible, mostly contemporary members of the community. What you don’t see is the story of the average citizen. It is important to remember that these impactful people wouldn’t have had the same success without the volunteers, voters, and general supporters from throughout New Brunswick behind them. They prove that a city is more than a congregation of people and places, it is a physical embodiment of the way those people choose to shape the world around them.

Ralph Waldo Emerson once wrote in his journal, “Let every man shovel out his own snow and the whole city will be passable,” enforcing that a city can and will work well if each individual fulfills all of his/her civic duties. The people featured in “Serving Hub City” have lived by that maxim everyday. They do their best to shovel their own small portion of snow, living to better themselves as much as possible. However, they have also gone above and beyond to facilitate and serve others, shoveling the snow of the community. Hopefully this site impresses upon its viewers that it is possible to have an impact in your community. Furthermore, we hope the stories of the people it features inspires others to take up their own shovel, to take action, and to make a difference.