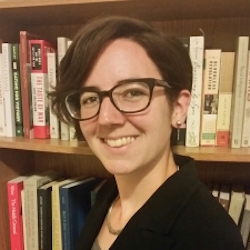 Email: This email address is being protected from spambots. You need JavaScript enabled to view it.

Carla Cevasco’s research examines food, medicine, and material culture in colonial North America. She is particularly interested in cross-cultural interactions between Native, European, and African peoples in early America. Her first project, Violent Appetites, is a history of scarcity in early America. Her second project, tentatively titled The Lives of Plants, explores plant agency and medicine in the Atlantic World. She is Director of the New Jersey Folk Festival. She teaches courses in early American studies, food studies, material culture, borderlands, and Native-European encounters. She received a Ph.D. in American Studies and an M.A. in American History from Harvard University, and a B.A. in English and American Literatures from Middlebury College.

What can AMS students expect from your fall courses?

In American Folklife: Foodways in Global Context, we’ll be learning about the global history of American food, from sugar and slavery in early America, to the origins of Taco Bell and Fritos. We’ll even be trying some historical food samples! For a final project, we’ll create a digital exhibit about American food.

In Learning from the Past: Early America and the 21st Century, we’ll examine many challenges that Americans faced in early America and continue to face today: income inequality, epidemic disease, climate change, migration and refugees. We’ll ask what we can learn from how people navigated these challenges in the past, and students will write a portfolio of opinion essays comparing the past and present.

New Jersey is a fantastic place to study food, because of the unique combination of the agricultural identity of the Garden State, indigenous foodways, and immigrant food traditions. Food is such an interesting subject because it is both necessary for survival and an important part of culture and identity. Food is really huge in American culture right now, and connects to many fields of study—politics, medicine, etc.—which means it’s a great topic for public humanities projects.

Many of the challenges we face today have their origins in early America. Often, people hear “Early America” and think of the Founding Fathers: a small, elite group of white men. But actually, early America was the most diverse place on the planet, where people from the Americas, Europe, Africa, the Middle East, and even East Asia came together under circumstances of colonialism, war, and slavery. It was a really violent, challenging time that helped form the United States today.

Your research concerns indigenous peoples in the northeast region of what is now the United States of America. What is unique about your focus within the field of Native American studies?

I’m very interested in the vast bodies of knowledge that Native peoples had (and continue to have) about the environment and medicine. Because Europeans wanted to take Native land and exploit Native people, Europeans have often disregarded these knowledges. But indigenous strategies for surviving hunger, for example, remain really relevant in a world where 800 million people are food insecure.

Do you have any possible public history and/or digital projects on the horizon?

A colleague and I are filming a Youtube video about ceramics and the human body with the Chipstone Foundation, which is a material culture research center in Milwaukee. We hope that the video will inspire teachers, students, and curators to think differently about material culture and the history of the body. It’s a sequel to a pedagogical video we made about furniture back in 2013. Look for the new video sometime this fall!

What is your vision for the New Jersey Folk Festival?

I’m excited to become part of such an important Rutgers American Studies tradition. In my new role, I’m looking forward to maintaining what NJFF does so well, featuring a broad range of performers and tradition bearers, while expanding the festival in new directions, from new themes to food options.

Colonial American food was pretty gross—people had very different tastes than we do now, and they also didn’t have much in the way of refrigeration, so they ate a lot of rotten food (although they did develop many technologies for preservation, such as pickling). But I’ve had rum punch based on colonial recipes, and that tends to be tasty.

Getting to know New Jersey by eating lots of delicious Jersey produce and cycling on some beautiful bike paths, including the Delaware and Raritan Canal trail.

Last book you read for pleasure?

The Brief Wondrous Life of Oscar Wao, which I picked up because of its Rutgers connections.

Can’t answer that one with dignity.

What can you cook really well?

When I was a kid, I won a few blue ribbons at the county fair for brownies.

Last movie you saw in theaters?

Do you have any hidden talents?

I grew up on a fruit and vegetable farm so I have a green thumb.

Where do you get your news?

Favorite class you took in undergrad and why?

Oh, that’s a hard one. American Women’s History with Amy Morsman opened my eyes to histories I had not known about before, which really transformed my understanding of American history as a whole. In an environmental studies class with John Elder called Farm Stories, we read literature about farming before interviewing local farmers and mounting a multimedia exhibit about their experiences. I loved having the chance to apply what I’d learned in the classroom, out in the wider community.

When faced with a seemingly impossible task, break it down into smaller pieces and attack them one at a time.